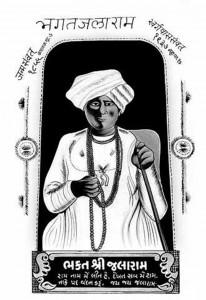 SHRI JALARAM BAPA (1799-1881 A. D. )
The saying goes – Guest is god-‘Athidhi Devo Bhava’. That is why among Indians, it is a tradition, whether there be sufficient food for the family members or not, but whoever comes to the house at the meals time, are first fed. Feeding all, and especially the poor, are not only a humane but also
Sant Jalaram
a spiritual act as per Indian thinking.There is no greater meritorious act than feeding the poor and hungry. Actually allaying the hunger of whosoever he is, whether he is rich or poor, is a highly meritorious act indeed.